Most people learn in high school (if they’re paying attention) that human eye color is a genetic trait which follows fairly simple rules. The primary gene that controls eye color exists in several forms, called alleles. The protein produced by one of the alleles causes the eyes to be brown, while a variant allele producing a slightly different protein does not. Since the human genome contains two copies of each gene, if even one of these copies is the allele for brown eyes, brown will be the resulting color, regardless of the other allele. Such an allele is said to be “dominant”. Another eye color (e. g. blue) will result only if both copies of the gene are non-brown alleles. Such alleles are said to be “recessive”. 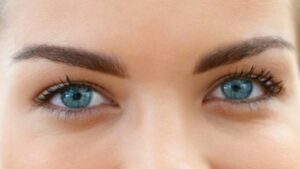 This would be advantageous, at least in prehistoric times, if in addition such a man was less inclined to provide for a child without blue eyes – even if there was no conscious recognition that the child could not be his own. Some recent research has indicated that blue-eyed men sometimes actually, if unconsciously, do have a tendency to regard blue-eyed women as more “attractive”, and hence (presumably) are more likely to choose them as mates: Eighty-eight male and female students were asked to rate facial attractiveness of models on a computer. The pictures were close-ups of young adult faces, unfamiliar to the participants. The eye color of each model was manipulated, so that for each model’s face two versions were shown, one with the natural eye color (blue/brown) and another with the other color (brown/blue). The participants’ own eye color was noted.

Since a mother almost always can be sure a given child is hers (except for rare events like accidental switching of infants), a mechanism that provides a way to recognize that a child isn’t her own provides little additional advantage. And so, blue-eyed women do not have an evolutionary advantage from a tendency to regard blue-eyed men as more attractive than others. So they do not, in fact, have that tendency.
If you’re looking around for an example of specific, and unexpected, behavior for which evolutionary psychology offers the simplest explanation, this may be a good choice.
Newer The Most Common Eye Colors
Back to list
Older What Determines Our Eye Color
close