What Is Heterochromia Iridum? 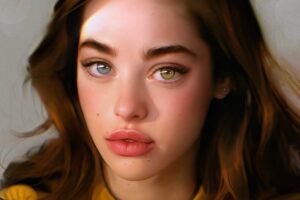 Usually, the amount of melanin contained in the iris determines which colour our eyes are. It is understood that blue eyes contain the least melanin, while brown eyes have the most. Heterochromia of the iris is harmless and does not affect one’s vision. In fact, it can endow oneself with a bewitching difference in appearance.
Celebrities like Christopher Walken and Mila Kunis are famous personalities with heterochromia. In the animal world, Pets with heterochromia are often treasured for this feature. There are three main types of heterochromia based on its occurrence. Complete heterochromia presuppose completely different coloured eyes. Partial heterochromia involves an individual eye having differently coloured portions. Central heterochromia is the occurrence of differently coloured central portions of the iris, in comparison to its edges. Heterochromia can be genetic or acquired. The genetic version of this phenomenon occurs due to mutation or is inherited. The acquired cases are usually caused by certain medications or injuries. Eye trauma can cause discolouration of the iris. Glaucoma – an eye disease that causes increased pressure in the eyes through fluid accumulation – is another possible reason. However, Heterochromia is quite harmless in most cases. It is also known to be much rarer in humans in comparison to animals.
Only about 11 in every 1000 Americans have been recorded to be affected by the condition. In comparison, dogs and cats are more inclined to have heterochromia.  Dog breeds like Huskies, Great Danes, Dalmations, Border collies, Sheepdogs, Chihuahuas, and Shih Tzus in particular are known to be quite susceptible to this condition. Cat breeds susceptible to heterochromia include Turkish Van, Khao Manee, and Japanese Bobtail. Mixes are also able to inherit this condition. While this fascinating phenomenon is well-understood, its degree of rarity in humans is still not calculable.
Newer How Does The Human Eye Actually Work?
Back to list
Older Glasses or Contacts: Which are better for helping your vision?
close