How Does Night Vision Work?

For finding visibility in darkness, night vision equipment essentially uses two different methods. The first one among these is thermal imaging.
Thermal imaging is based upon heat emitted by objects, which is used to ensure visibility for them. Infrared light emitted by the objects is detected using infrared detectors, and a thermogram is created, which is a detailed temperature pattern.
The thermogram is then converted into electric impulses and sent to a signal processing unit. 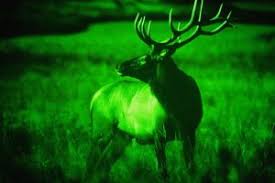 The signals that are processed are sent to a display and an image is shown.
Light amplification is the more commonly used method for visibility in darkness. In this method, small amount of light present at the focus area is converted into electrical energy.
Electrons then pass through a thin disc and are multiplied. They then bounce off a phosphor screen, which converts them into light again. It is this light that a viewer sees, and it enables him to see in the dark.
Let us now consider how NVGs work. When individual photons enter night vision goggles (NVGs), they strike a charged cathode plate. The charged cathode plate then emits multiple electrons.
The spray of electrons then strikes a phosphor plate and an image is created. This is pretty similar to the way in which images are created in television.
There are a few events wherein the surroundings are very dark and it is not possible to even with NVGs. In order to enable vision in such conditions, modern NVG system use gallium arsenide chips for cathode plate. The chips have a high sensitivity to infrared light.
Newer Can Looking At Someone’s Eyes Allow You To Tell If They Are Lying?
Back to list
Older How Contact Lenses Work
close