Blue Light, Is It Bad For Your Eyes? 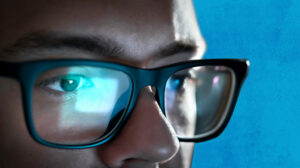 Many experts are adamant in exploring the idea that blue light is far more beneficial than detrimental. The main argument being that blue light isn’t the direct cause of pre-mature blindness. Blue light may be an anchor that initiates basic human function, as the human body is so used to it. Blue light initiates parts of the brain that aren’t stimulated by any other type of light, the effect that blue light has on the brain is irreplaceable and serves as a great benefit to our life with the amount of technology we come into contact with.
Newer How Colored Contact Lenses Work
Back to list
Older Unlocking The Potential Behind Your Eyes
close