What Determines Our Eye Color

If the eyes are the windows to the soul, then what colour are your windows? Baby blue? Big and brown? Green or hazel? Haven’t you ever wondered about how your eyes came to be the colour they are?

What determines eye color? Did your parents pick them out for you? Not exactly, but they did play a big part in determining what color eyes you have. How? They passed along their genes to you! There are two main factors that help determine your eye color: the amount and pattern of dark brown pigment (called melanin) in the part of your eye called the iris and the way in which the iris scatters light that passes through the eye. The more important factor is the pigment, which is determined by your genes. 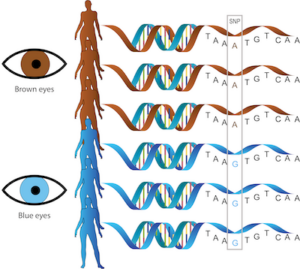 Deep inside the nucleus of your body’s cells are 46 chromosomes, divided into 23 pairs. When you were conceived, you inherited one chromosome from each parent to make each pair of your chromosomes.

Chromosomes are comprised of pieces of DNA called genes. These genes, which also come in pairs, determine many of your characteristics you will develop. Scientists believe that as many as 16 different genes play a role in determining eye color. The two main genes believed to be responsible are OCA2 and HERC2, both of which are part of chromosome15.

Genes are, in turn, made up of alleles that ultimately determine whether any particular characteristic will appear. For each trait you can inherit, there are two alleles. If the two alleles are the same, they are homozygous. If they are different, they are heterozygous. For each trait, one allele (dominant) is expressed (the trait it represents appears), while the other allele (recessive) is unexpressed (the trait it represents does not appear). Recessive alleles are only expressed if there is no dominant allele present.

Have you ever noticed how some people’s eyes seem to change colour depending upon the lighting? That occurs because the iris has two layers. Sometimes there is pigment in both layers. In people with blue or green eyes, however, the front layer will have very little or no melanin. Depending on the amount and diffraction of light, their eyes may appear to change colors.

Some people have two different eye colors. This results from a condition called heterochromia. It’s very rare, but usually harmless. It occurs due to differences in the early stages of iris development.

123
Shopping cart
close
Start typing to see products you are looking for.